KCCU, Cameron University’s public radio station, has once again been honored for outstanding journalism with the announcement of four awards for stories aired in 2013.

KCCU news director Clinton Wieden was honored by the Oklahoma Pro Chapter of the Society of Professional Journalists, receiving a first-place honor in Sports Reporting and a third-place honor in Feature Reporting.

Both awards in Sports Reporting were given to “A Night to Remember,” a story about the benefit baseball game in Duncan played in memory of Chris Lane, the Australian baseball player who was killed there last August. The awards for Feature Reporting were given to “Remember, Honor, Serve…and Jump,” a story about the Frederick-based World War II Airborne Demonstration Team.

“It’s always nice for our work to be recognized by our peers,” said Wieden. “When it comes to reporting, our goal at KCCU is to produce high-quality content to inform our listeners. These awards are an indication that we’re achieving that goal.” 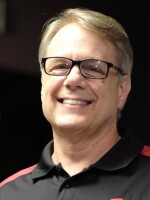